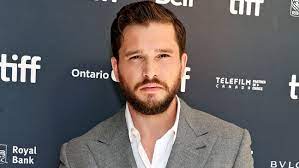 Kit Harington is an English actor best known for his portrayal of Jon Snow in the HBO series Game of Thrones. He has also starred in films such as Pompeii and How to Train Your Dragon 2. He made his professional acting debut in 2008, in the National Theatre’s adaptation of War Horse. In 2013, Harington was voted the “Sexiest Man Alive” by Glamour magazine. He has also been a vocal advocate for mental health awareness, speaking out publicly about his own struggles with depression.